One thing that turns me on is unusual recipes.  I like old recipes that when I look at it, I can not imagine it's flavor, texture or even how it might be served.  One of the first recipes I resurrected was an Avocado and Grapefruit cocktail from the Modern Priscilla cook book.  That was easy to make and now I can't not imagine how good it tastes.  There is a another recipe in that book for Sardine Cocktails, which I really want to make but haven't mustered up the courage and I like sardines.  However this post is about a recipe I found in the First edition of the McCall's Cook Book (1963).

I found the cook book at the local town dump book swap, where I've found several other interesting cook books there as well.  This book is interesting for several reasons.  It has it's share of casserole and cake recipes, but also has unusual ones as well. It is like someone took an 'old' cookbook added a few new recipes, stuck a cool cover on it and PRESTO! A modern swinging cookbook.  However the cook book doesn't know that.  It's like dressing Granny in a mini skirt.  To give you a flavor of the book, one recipe is exhaustive; it has fourteen steps and takes FIVE hours to prepare and it only serves six people.  Who has that kind of time?  Did anyone ever have that kind of time, anytime in history?

Luckily there are easier recipes which are interesting.  The one that caught my eye the other day was for Pickled Pears.  It is super easy and makes a great side for meat dishes, like pork chops, ham or lamb. 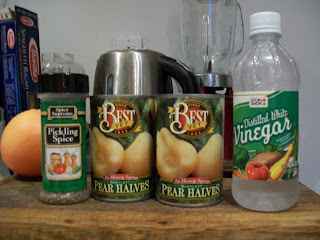 1.  Drain the Pear Halves and reserve the liquid.

2.  In a medium saucepan add the liquid and the pickling spices.

3.  Bring the pear liquid to a boil and simmer for 15 minutes.

4.  Add the vinegar and pears to the hot liquid.

5.  Let cool and place in the refrigerator until chilled.