A Tale of Two Cakes or That's a lot of baking powder.

I love baking, and I love old recipes, which you already know.  This past month a co-worker lent me some old cookbooks that belonged to her grandmother.  One was a slim collection of New England recipes and the other was a cookbook used in the Brookline, MA school system to teach Home Economics.  Both were published in the 30s and both had an assortment of unusual recipes, which are the ones I like best.

The New England Cookbook had a recipe which popped right out, Cambridge Favorite Cake.  What struck me were the instructions for preparing the cake.  It was like a mash up between a butter cake and a classic sponge.  Not only did you cream the butter with sugar, but in addition to beating the egg whites, you whipped the yolks with sugar and use five teaspoons of baking powder.  This recipe uses a lot of bowls, but it is worth it.  Did I mention that it makes three 9-inch round cake layers!  It is some cake.

Intrigued with the unique preparation of the cake, I looked through my collection of old cook books to see if I could find any other cake recipes which used a similar preparation model.  I wanted to date the cake by trying to find the earliest recipe.  I found a similar recipe in a facsimile edition of the 1896 Fannie Farmer cook book.  In that book the cake recipe is called Boston Favorite Cake.  The instructions aren't as detailed as they are in the New England Cookbook, but the ingredient list is almost same, including the FIVE teaspoons of baking powder.  That amount of baking powder amazes me.  I wonder if there is an earlier account of this fine recipe?  I'll have to do some more sleuthing.

I knew I wanted to make this cake and I mentioned it on Facebook.  A friend, Erica, asked me if it was a precursor to Boston Cream pie.  I told her I didn't know, but did tell her I was concerned about the amount of baking powder in the recipe.  I am not sure when double-action baking powder was invented, but was sure it wasn't as early as 1896, which is the earliest published date of the recipe I could find.  I thought that maybe I should halve the amount of baking powder.   This is when Stephen Exel entered the thread and  wrote that he had a copy of the recipe from a 1947 Culinary Institute of Chicago cookbook.  Since double-action baking powder was established by this time, he thought that the five teaspoons was correct.  He went on to say that:
>>the cake is meant to be 3 layers and is described as "tall, light, and elegant"<<

Stephen also told me that this recipe appears in the latest edition of Fannie Farmer (100th Anniversary, 1996), but the recipe was modified to make two 8-inch round layers.  He also said that he wanted to make the cake as well, being equally intrigued by it.

So with all this information and curiosity I decided to bake the cake on a Saturday morning and , Stephen was also baking his cake the same day.  I had just started the Metropolitan Opera broadcast of Ariadne auf Naxos [because you need the right music for baking, or at least I do*] when I checked my email.  There was one from Stephen, he gave me a warning - Check the expiration date of the baking powder!  He checked his and it was way out of date.  I double checked my baking powder and it was fine.   I had thought I had just bought it and I was right, but memory sometimes fails.  I also decided to read the instructions on the baking powder label. Did you know that you are supposed to shake the baking powder before using it?  I didn't.  This made me think of a helpful hint, why not write the expiration date on the lid of the baking powder as well as a reminder to "SHAKE FIRST". 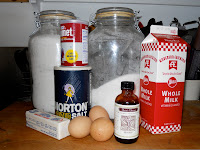 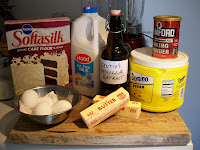 Okay here is the recipe Stephen emailed me, which is the same one I used: 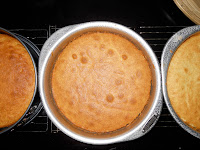 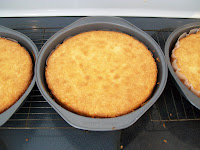 So what do you do with three layers of delicious cake?  You fill and frost! 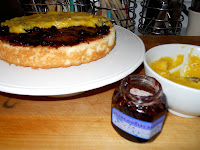 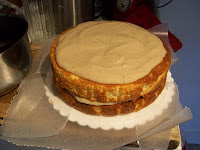 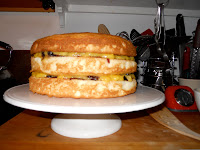 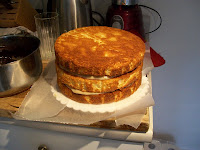 My filling and frosting idea came from John.  He suggested banana cream filling with a chocolate frosting.  Stephen filled his with a lemon curd and blueberry jam and covered it with a coconut butter-cream frosting.

Here are the recipes:
Lemon Curd 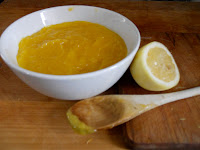 
The coconut butter-cream frosting recipe will be in the April 2010 issue of Traditional Home.

The banana cream filling and chocolate frosting both come from the Fannie Farmer cookbook, 11th edition.


Creamy Chocolate Frosting
Note:  Don't make this frosting until your cake is ready to be frosted.  This frosting is put on the cake immediately after it is cooked.  It is almost like a thick pudding. 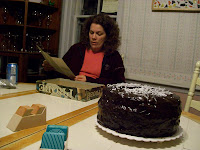 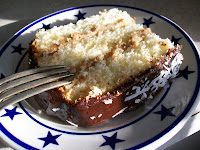 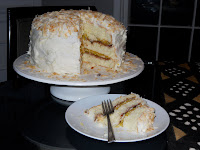 If you decide to make this cake. Leave a comment. Better yet, send me some pictures to post.  You'll love this cake and I am sure it will be the one you will make for special occasions from now onward.  It's that good!

Erica keeps a blog at MakeaRoux.blogspot.com

*As a side note, I found out that Stephen was listening to Maria Callas when he baked his cake.
Posted by Kentie at 3:21 PM No comments:

Note:  Preparing your pans by greasing them with oil and lining with wax paper.

Also, use shiny silver pans, or disposable aluminum pans.  If you are using dark pans, reduce the oven temperature by 25º
Posted by Kentie at 5:11 PM No comments:

by Mary Randolph.  I bought a facsimile of it  in P-Town in 2008 while I was shopping with Kalvin of San Fransisco, from Hello Waffles fame. Kalvin was in P-Town for a Bear convention and I wanted to meet him.  I'd  communicated with him for over a year, but never met him.  So I popped down to P-Town, had lunch with him and then we went shopping.

Since that time I've perused it many times imagining the dishes.  It may be my favorite, post colonial American cookbook.  It was originally published in 1824 and came about after Ms. Randolph's fortunes were diminished.  She was a well known for giving the best dinner parties before she lost her money, and afterwards ran a boarding house, which only sharpened her cooking savvy.  So what's a gal to do when she's down and out?  Collect her recipes and publish them.   This is similar to how The Joy of Cooking

came in to being.  Do I see a pattern?

The first recipe I tried from The Virginia Housewife was Walnut Ketchup.  We have a Black Walnut tree and it just seemed like fate.  I had just bought the book when the walnut tree just sprouted young tender green walnuts.  Just what was required.  Also, it sounded unusual and I really was curious about the taste.  And how did they taste?  Young walnuts, that were soaked in brine, taste like lime.  I was surprised.  The finished product, the Walnut Ketchup, was closer in flavor to Worcestershire sauce.  I will make it again, when I don't forget to harvest the young walnuts.  Maybe this summer.

Until that time, there are plenty of other ketchups and sauces to make.  Just the other day, while I was looking through the book and thinking of the Walnut Ketchup I made in 2008, I come across a recipe for Oyster Ketchup.  At first I thought it was kind of disgusting, but then I remembered that fish based sauces have been around a long time. The Romans had Garum

, a type of fermented fish sauce.  Today, cooks use anchovies

for flavor and the Asian cooks was all sorts of fish sauce, which can be purchased in the international food aisle in the grocery store.  So I decided that Oyster Ketchup might not be so bad.  Also the recipe was super easy to make.

That's my take on Mary's recipe.  I've made it twice.  The first time I used 8 oz. of  'fresh' oysters and the result was a thin, milky, tasty liquid.  The second time I used two 4 oz cans of oysters

and the result was thick and green, but still tasty.

Mary suggests that Oyster Ketchup is best used in white sauces.  So I made a white sauce with the oyster ketchup and served it with fish.  It was good.  It is hard to describe the flavor.  You can taste the oyster but together with the mace and cayenne pepper, you have a unique flavor.  Try it out and let me know what you think of it and how you use it.  I was talking with a friend of mine, Leila, and she thought it would be good cooked with olive oil and garlic

and served over pasta.  I haven't tried that, but I think it is a good idea.

Next time I may write about the Mushroom

Ketchup I am making right now.