One of my favorite cookbooks is The Modern Priscilla Cook Book.  I have the 1924 and the 1930 editions.  I love to collect various editions of cookbooks to see what changed.  This cookbook is also the first "retro" cook book I bought.  If you can believe it, I wanted to find public domain cookbooks to talk about recipes on my podcast The Flatus Show.    I chose old cook books because I was paranoid about being sued.  It turns out that I really like the old cook books better than the newer ones and I developed an interest in the history and flavors of American cooking.

This memorial day weekend I decided to make some jelly.  My first choice was to make October Jelly.  I had bought the grapes on sale awhile back and made the grape juice and froze it. However as I read the instructions, I should have prepared the grapes differently.   You'll have to wait until I find some more grapes on sale and when I do I promise I will October Jelly and give out the recipe, or least my working recipe.  Just so you don't fret, I didn't waste the grape juice.  I made regular grape jelly.

As I was looking at the jelly, jam and conserve recipes and I noticed a recipe for Ginger Pear Jam.  I was intrigued by the name but also the ingredients. It called for canned pears!  My first politically incorrect thought was "How white trash is that!".  But I changed my mind.  It did, after all, call for crystallized ginger.

For the recipe I measured out 2 1/2 cups of canned pears and chopped them.  I ended up with 3 cups of finely chopped pears.  I measured out 1/2 c of crystallized ginger which is six pieces.  I chopped that up too. The rest of the ingredients were straight forward except for the pectin.  The recipe called for 1/2 cup of pectin.   I searched on the Internet for a pectin equivalence chart, but found very little information on how to exchange liquid pectin with powdered pectin.  I did find one site which gave this equivalence: 2 Tb of liquid pectin = 2 t powdered pectin.  It ends that one box of Sure Jell pectin equals 1/2 cup of liquid pectin, according to the formula.

I was a little leery about using the whole box of pectin because I knew the recipe was only going to make four 8-ounce jars of jam and I've made eight jars of grape jelly and used only one box.  So my thought was that the jam could come out like a brick.  Since pears are a low acidic fruit I decided that the extra pectin wouldn't hurt.  It is the pectin, along with the acid in the fruit and the sugar which make the jelly gel. So I used the whole box.

Some low acid jams and jellies can take up to two weeks to "set" and I was going to wait the two weeks for my jam to set before testing it, however my curiosity got the better of me and I opened a jar today.  At this time it is  the same consistency as marmalade.  I wonder if it will become firmer in a few weeks?  Besides its consistency, it is a terrific tasting jam. It is a hearty flavor, very gingery with a hint of the pear just beneath the surface.  I tried it with cheddar cheese on a cracker and it was the right accompaniment to the cheese.  I think it might go well with chicken, especially a chicken salad.  And of course it would make a nice cake filling. 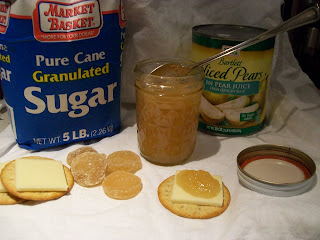 1. Place the finely chopped pears and ginger into a large sauce pan.  Add the grated rind plus juice of the two lemons and the sugar.
2.  Cook slowly [low continuous boil] for 10 minutes.
3.  Add the pectin and boil rapidly [higher heat] for 5 minutes.
4.  Pour into (4) 8-ounce jelly jars to within a 1/4 of the rim.  Place the lids on the jars and screw the rings tightly. Process in boiling water for 10 minutes.  Make sure the jars are completely submerged in the water.  There should 1 to 2 inches of water covering the jars.

Please note:  There is a whole process

I do not explain.  You need to wash the jars and lids.  Boil the lids and rings and keep them in the boiling water until they are used.  Also, you need to boil the jelly jars and place them on a clean towel upside down until they are ready to be filled with the hot liquid.  When sealing the jars wipe off any jelly that might be in the rim.
Read the The Ball Blue Book Guide to Preserving for exact details for making jams and jellies.